Housed in a small cottage in historic Old Town, Café Pacifica offers a welcome taste of elegance, sophistication, and delicate creativity. The fresh, contemporary menu features a dazzling array of fish and shellfish, which Chef Eddie Zamarripa prepares in his exquisitely innovative style as well as “simply grilled.” A modest selection of chicken, steak and vegetarian options are offered, as are daily specials showcasing seasonally available, and often exceptional, fish. The noticeably cultured wine list, prepared by Owner Frank Busic, offers wines by the glass, half bottle, and bottle, while the Pomerita—the restaurant’s signature twist on the traditional margarita—garners national attention.

Over the years, San Diego has built a reputation for having some of the finest seafood restaurants on the west coast. In the 1950's and 60's, the emphasis was on 'family style' operations serving fresh local fish, lobster and abalone that was prepared in a simple, straightforward manner.

As tasty as this food was, there still remained room for a more sophisticated approach and, a few decades ago, dining establishments eventually began to emerge that focused on upscale seafood dishes, fine wines and on a new concept that later became known as 'Pacific Rim Fusion'; an eclectic mélange of the finest cuisines from both the eastern and western coasts of the Pacific Ocean. It was during this era that Cafe Pacifica was born.

Situated in historic Old Town on a shaded portion of San Diego Avenue that is lined with fragrant, Brazilian pepper trees; this is no 'tourist bistro'. That is not to say that tourists will not greatly enjoy the wonderful meals at Cafe Pacifica, it is simply to point out the fact that this fine restaurant has always been dedicated to gastronomic excellence, rather than to specifically matching the prefabricated, entertainment-like format of the well-known State Park in which it is located.

Proprietor Frank Busic has been managing the operation for over 10 years, and became the sole owner nearly 5 years ago. Constantly striving to maintain the highest of standards, Frank has successfully prospered while other restaurants in Old Town have simply disappeared. In addition to his organizational talents and diligent administration of the business end, Cafe Pacifica's ongoing reputation as one of the area's most accomplished dining establishments can also be ascribed to the efforts of Executive Chef Eddie Zamarripa.

Chef Zamarripa is, above all, a master at creating innovative seafood preparations, and on the night of our visit he once again confirmed his expertise. He started us out with an orchid crowned appetizer of tender, northern halibut atop fresh baby spinach, artichoke hearts and zucchini in soy demiglaze. The combined flavor of the artichokes and halibut were commanding and expertly offset the texture of the spinach and squash, which was perked up further by the slightly tangy sauce.

Before our next course, my guest and I were invited to enjoy Cafe Pacifica's award winning, signature cocktail, the Pomerita. This bright, fruity specialty is so good that you might end up ordering two. Made with the finest of ingredients commonly found in the traditional Margarita, their addition of pomegranate juice makes for a lively taste treat that can't help but enhance your dining experience. We also accompanied our meal with a bottle of a flavorsome, northern California Pinot Blanc from a rare, family vintage that perfectly balanced our entire meal.

Next we were treated to plate of special, nori wrapped, rice-less sushi rolls made with fresh salmon fillet and stuffed with sweet peppers, pickled ginger and crabmeat. These were served with spicy daikon sprouts and crisply fried vermicelli in savory soy vinaigrette. Although not regularly offered on the menu, this dish is available by request. It is elegantly dense, rich and satisfying. With a cup of the house chowder and some bread it could be a meal in itself.

This brings us to the soups. Ah, yes. I must say that this chef is a gifted soup maker the likes of which are rarely encountered these days. The broth of his bouillabaisse is artfully reinforced with the flavor of simmered lobster shells, and is one of the best in town. Both the clam chowder and the mussel bisque that we were served on this visit were absolutely top notch, and would have been a delight to the palate of the world's most discriminating gourmet. Please don't skip the soup here.

'Baquetta' is a member of the tropical grouper family that is found along both southern coasts of the Baja California peninsula. It is, in my opinion, one of the finest eating fish on our planet, and can be enjoyed in a number of ways. Chef Eddie surprised us with a beautiful baquetta fillet that had been braised in aged, black sake. Served atop crisp, tart slices of Granny Smith apple and set in delicious cilantro vinaigrette and a smoky, devilishly spicy chipotle sauce, the baquetta had overtones of fine shellfish and the apple proved to be a classic foil for the sake glaze. While some restaurants like to use the ubiquitous term 'sea bass' to describe any number of fish species, Cafe Pacifica makes it a regular practice to let guests know exactly what they're serving, and it's always the best quality seafood available on the market.

The chef then arrived with a generous portion of seared, sesame-crusted ahi that was stuffed with pickled ginger and served with steamed, baby bok choy and basmati rice. Arranged on a plate that was strikingly decorated with both a teriyaki and a wasabi sauce, this dish was inspiring to behold and resonant in both flavor and texture.

The coup de gras was their famous creme brulee, one of the richest custards that I have had the pleasure of ending a meal with. With its crispy, candy-like crust covered by garden fresh sliced strawberries, it was the perfect dessert.

You can travel around the entire city and spend a lot more money, but you will still be hard pressed to locate better quality food, value, service and overall dedication to excellence than can be found at Cafe Pacifica. 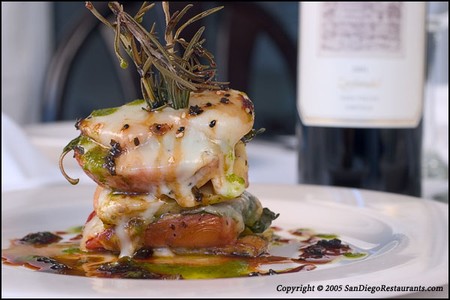 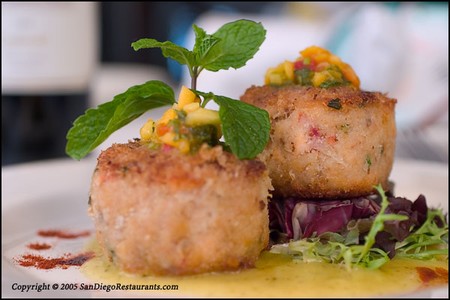 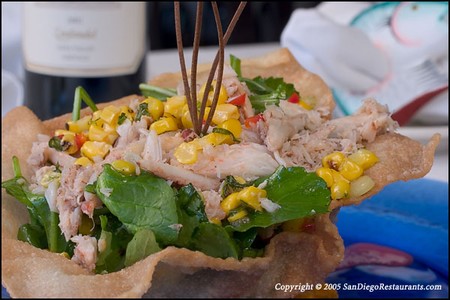 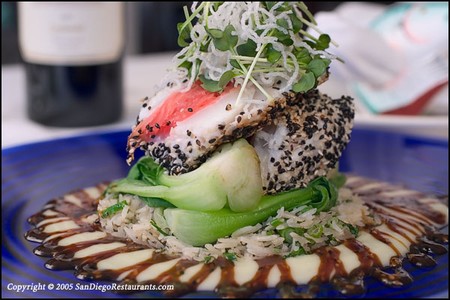 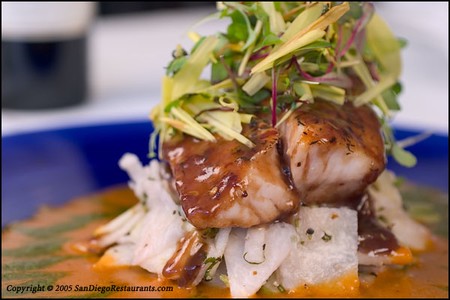 Oysters on the Half Shell

First time back in several years. Appetiser special was a chilled Yellow Tomato, Grilled Eggplant, Mozzarella-Basil tower. Simply perfect as a summer appetiser. Sliced Pear and Candied Walnut salad was an outstanding composition. Roasted Swordfish with Sesame seeds was sublime. Wine list, particularly wines by the glass and half bottle, was superb.

My girlfriend and I wanted a nice, upscale seafood dinner and visited Cafe Pacifica after reading some of the reviews. We did not know what to expect as it is located in Old Town (not a seafood hotbed), but were pleasently surprised to say the least. It is definitely a very upscale and refined restaurant, and the prices were considerably less anything comparable along the water. This was one of the best dinners we've ever had.

The well known margaritas were great. They had a great wine list, although we couldn't utilize it. The special soup, a spicy chowder with shrimp and beans, was terrific and a can't miss. The fish were perfectly prepared, and the sauces and spices were tasty but not overbearing (and I don't usually like much on my fish).

My girlfriend was able to order a chef's favorite that wasn't even on the menu. The creme brule and strawberries and chocolate desserts were very good, and the dessert selections were plenty. I have read reviews about mediocre service, but this definitely was not the case. My water was always full, the staff was very friendly, and the servers even came by several times to clean up bread crumbs from the table. Food was delivered promptly.

In summary, dining at this restaurant will not be a disappointment. It is not nearly as crazy as the seafood places by the water, the food is wonderful, and the service is great.

A late dinner at Cafe Pacifica in Old Town is prime for the restaurant was evenly paced and quiet. For starters, we had the grilled portabello stuffed crab and shrimp mushrooms and the new zealand green mussels in a garlic and herb sauce. Both were exquisite. My main entree was the seared mahi-mahi coupled with a lime and cilantro risotto. The entree was very flavorful but the sauce was a bit too heavy at times. I preferred less sauce draped over my plate. The food was refreshing. My guest decided on the sole stuffed crab with a mushroom risotto, however it was a little much in the fishy-ness. Also, the honey glaze did not complement the sole staffed crab. My guess is that the fish should have been fresher. Although, the service, wine selection and timeliness were great, the dinner experience was quaint and enjoyable.

Our party of five came for an early, pre-theater dinner at about 6pm. The restaurant was very uncrowded so we thought we'd have no problems getting in and out. Fortunately our drinks and the bread came quickly because everything else took a very long time. One son had a simple bowl of soup, the other a caeser salad. My husband and I split the portobello/ crab appetizer. Nothing was fancy so we were mystified as to the delay and their were no explanations or apologies offered. Our entrees finally came approximately one hour after being seated. My corn and crab salad was good but uninspired. The rest of the family had regular entrees, pasta, steak, chicken etc... Most were luke warm so it seemed that not only did the kitchen take it's time but the wait staff were in no hurry to ensure a decent tip. Although at most other restaurants we would have had ample time for dessert we felt we couldn't risk another 30 minute wait and even said so to the waiter when we declined dessert. He had nothing to say in response. So, edible food, poor to to indifferent service. Certainly no reason to come back unless every other eatery in Old town is full or closed.