Come discover La Playa Bistro, a restaurant that will surely redefine your classic California dining experience. The contemporary Point Loma dive is open for breakfast, brunch, lunch, and dinner, serving well-balanced comfort food with a flair for the flavorful. Delightful fare options range from the typical like the Calamari to the exotic like the Barramundi, an Indonesian fish presented over thinly sliced celery roots wrap with a side of sundried tomato pesto. La Playa Bistro is also the ideal destination if you want to mingle with other guests at the L-shaped bar whose wonderful selection of beers and wines will definitely satisfy the drink connoisseur in you. Open seven days a week, La Playa Bistro is happy to delight new diners as well as returning guests!

Contrasts and deep metaphoric principles apply to each of the dishes I taste on a Wednesday night at La Playa Bistro, a restaurant that serves modern-day American fare, while also incorporating new and innovative cuisine into their menu.Located in Point Loma, the beachy backdrop probably has a lot to do with the conception behind this new eatery.  Point Loma is an area known for its harbor and downtown views, as well as scenic spots that both locals and tourists can enjoy on a frequent basis.   It is hard to miss the artsy La Play Bistro sign that welcomes both regulars and new guests.  Perched on the corner of Rosecrans, a street that runs through the heart of Point Loma, the eatery’s facade creates an interesting contrast between the concrete walls and cement sidewalks that surrounds it.  Brightly lit with windows trimmed in warm woods and a candescence emitting a soft glow onto the streets that supersedes the darkness gathering around the restaurant, La Playa Bistro is a culinary haven, where all guests can put aside their burdens and enjoy their comfortable surroundings and the delectable fare offered to them.

An oasis where travelers and natives may draw refreshing nourishment from, I am pleasantly surprised by both the décor and soft lighting of La Playa Bistro.  Slowly it dawns on me that nothing is left to chance here. Once we are seated by our server, Nathan, my guests and I admire the artful and relaxing set-up inside of La Playa Bistro.  The restaurant, with its cool, edgy bar and lounge-feel, also balances out the ultra-modern and contemporary setting with low-lit honey tones that give the establishment a cozy and homey ambience.  Tall windows flank the outer walls of the eatery and face the street.  Out-of-towners can sit inside La Playa and people-watch; or if you’re a local, view your old haunts in a new light.

Situated in an L-shape, the restaurant offers a tight-knit, intimate setting.  As if groomed for romantic dinners for two, the ambiance of the eatery speaks to the true connoisseur’s heart.  Whether you’re a lover of wine and spirits or just a lover overall, the L-shaped counter which curves around the bar will provide you an excuse to mingle and drink with your fellow carousers.

With a myriad of wines to select from, La Playa Bistro’s manager and sommelier, Morgan, has the backing and experience when it comes to wine pairings.  His inventory consists of sparkling wines straight from Australia and South Africa to wines bottled in California, whites from the Old World to the New World, and reds from Europe and New Zealand. The list is ongoing, but what makes the wine selections here at La Playa so special is that the wines that get imported by the restaurant are examined in detail before they get the ‘o.k.’  Morgan does his homework beforehand and studies the tastes and textures of each glass of wine.  Patrons’ reactions also get factored into the details and the inventory changes frequently.

Wine by the glass prices range from the affordable to the pricier.  White wines from European countries are around the cost of the appetizers at La Playa (around $6), while white wines from New Zealand, Australia, and the United States cost a little more.  Red wines by the glass from Europe, South America, and  California cost nearly the same, while certain red wines from California and New Zealand  and Australia are more expensive.  Desserts and ports range from the affordable to the little more high-end (from $7-$12).

It seems like every little detail of La Playa Bistro has been grasped, and this diligence toward each creative element that goes into the Bistro’s design displays the eatery’s flawless and attentive spirit.  Even the layout of the Bistro, with its elegant and modern furnishings alongside the Asia-themed lanterns, dark wooden features, and leafy plants surrounding the establishment makes you muse over the sheer labor of love that comes into fashioning such a thriving establishment.

From the appetizers to entrees and dessert, the fare at La Playa is extremely decadent, but this sort of decadence differs from the indulgence seen in some other more established eateries.  Executive Chef Andrew Velasco’s flair for the creative provides a wide array of possibilities, but within limits.  He not only studies the wide spectrum of flavors that may go into a dish, but he has also made it into a science.

La Playa Bistro serves modern American cuisine inspired by the various cultures that have sustained the American mainstream with their native fare.  The eatery fashions conventional dishes like the LPB Jambalaya and gives it a more exotic feel by adding New Zealand mussels and scallop, fresh fish, and a crab claw into the stew.  Other highlights on the menu include the Pork Tenderloin Saltimbocca; the Manhattan Strip Loin; and, of course, the all-American burger which you can have ‘Naked’ (natural certified Angus beef, butter lettuce, and tomato on a house-made onion bun, with fries) or ‘All-Dressed Up’ (the Naked Burger with cheddar, gorgonzola, bacon, caramelized onion, and butter lettuce).

The first appetizer I try is the Bacon Wrapped Dates with Medjool dates, feta, and bacon.  Initially, the starter appears extremely juicy and meaty, but once I take my first bite I am pleasantly surprised by the extreme flavors bursting from the bacon wrapped fruit.  Considering the bacon and dates are so interconnected, it’s no surprise that the flavors from the two main ingredients are fused together and even enhance one another.  The outward part of the date is smoky, while the inlay is sweet like a banana.  The textures of the date are like that of a potato—mesh that with the crispy outer layer of the bacon and you get a delectable appetizer bursting with an abundance of flavors.

The Bacon Wrapped Dates definitely set the stage for the dishes to come.  For the following appetizer I taste the Crab and Chips; there is a touch of decadence to this dish as well, but in a different way.  The dish is over-the-top but is not overwhelming in the sense that it will create unsatisfied diners.  Rather, I begin to see that it will leave them pining for more of the scrumptious and appealing tidbits that are presented right in front of me.  I am relishing in every bite of Executive Chef Velasco’s culinary talent as the crab dip seems to encompass for me how much thought and preparation goes into each of the items on the menu.  The dish is not only appealing, but it also makes one reminisce over the sort of rich and extravagant fare that is widely known as comfort food.  With a heavy topping of greens and neatly diced tomatoes mixed into the crab, plus a layer of flavorful avocado and dynamite sauces at the bottom of this savory starter, the dish can only be described as highly poignant.  The piquant flavors that arise from each mouthful of the crunchy taro and creamy dip make me anticipate what Executive Chef Velasco has in store for us in his next tasty creation.

The next appetizer is the Calamari with 5-spice, jalapeno, ginger, and sweet pineapple sauce.  Sampling the aromatic dish that is one of the most common starters on restaurant menus around the world, I am startled to find new and distinct ingredients inside the calamari that I had never before tried.  Fried to a golden crisp, the subtle coating of spices and flavors is fragrant and heavenly next to the soft flesh of the squid.  With small garlic bits sprinkled over the sweet and sour sauce, the dip complements the calamari seamlessly.  Instead of adding more flavors to the calamari and overpowering your senses, t 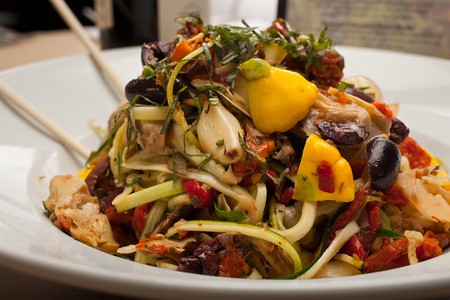 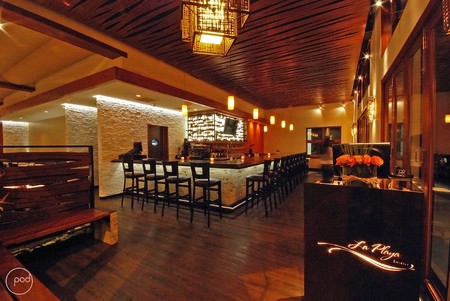 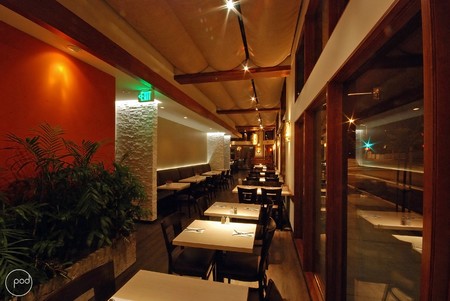 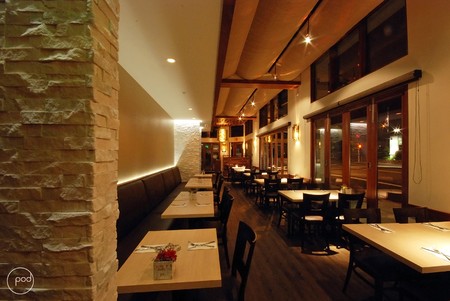 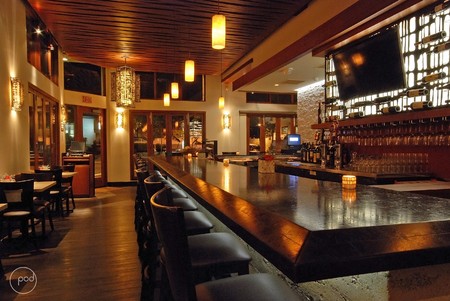 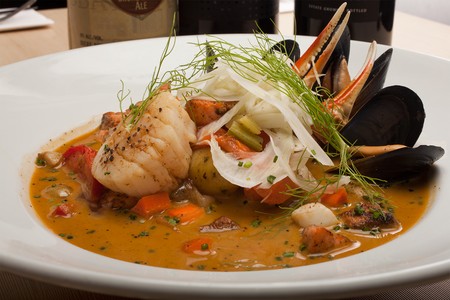 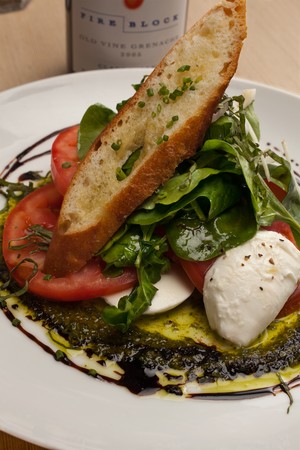 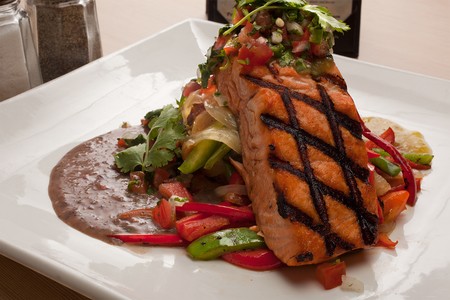 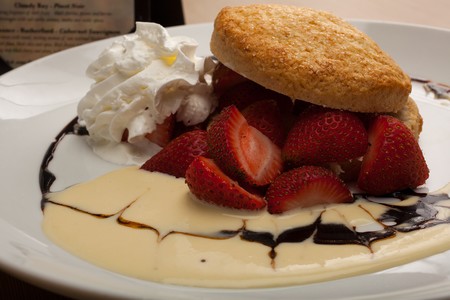 “Parents should come with instructions.” Anonymous

I have eaten at many restaurants around the country in such great cities as New York, San Francisco, Chicago, Etc. and its really refreshing to find a great new restaurant in our own backyard with such hospitable and food knowledgeable staff with such a wonderful eclectic menu items executed so well! The special wine offerings and even the beer selections offer the not so ordinary selections that would please many discriminating tastes. Our waiter Morgan was the consummate professional and was very knowledgeable in the offerings for food and wine. We started the evening with a wonderful appetizer of 5 spice Calamari, excellent! My entre choice for the evening of the Rib Eye & Glass Noodle dish will become one of my all time favorites and the fresh fish Grilled Salmon was loved by my guest along with her two glasses of the La Fond Chardonnay. We finished the evening with two amazing deserts, the Bread pudding and fresh fruit baked cobbler! When I was presented the evening tab it was hard to believe that we had had such a fantastic 5 star food and service for what was printed on the check! Great Value! I would highly recommend this restaurant to anyone considering a dinner evening in the Point Loma area. Kudo's to the ownership and staff for raising the bar in San Diego restaurant offerings! Terry