At the end of Rosecrans near the road to the Point Loma Lighthouse, San Diego’s young - and arguably best - French Mediterranean restaurant beckons every night, waiting for you to discover Chef Amy DiBiase’s refined cuisine.

A year ago, Restaurateur George Riffle chose Chef Amy (formerly of Laurel and Baleen) to head this restaurant where French cuisine meets California freshness, combined with all flavorful characteristics of Mediterranean fare. This dynamic pair, accompanied by their equally skillful staff, help make Roseville the kind of place you want to return to before you’ve even left, filling it with an evocative atmosphere anchored by familiar, well-executed food and personable charm.

As you walk into Roseville, you are first greeted by the the deliciously pungent air, fresh with the scent of hand-cut flowers, sweet with the aroma of roasted vegetables, and inviting with the proposition of braised meats. Your eyes then feast on regal gold fabrics, warm burgundy backgrounds, and mirrors that catch flickering candlelight on wine glasses, some full, some waiting for the carefully selected French, Californian, Spanish and South American wines.

Roseville’s bar, towards the back of the restaurant, sits just in front of a mostly open kitchen. Illuminated by a chandelier resembling carved ice, the bar is suited for dining as well as sipping your favorite Cabernet. Much care and thought have been given to aesthetics: its granite countertop, under-lighting, built-in purse hangers, and shining copper accents all contribute to the elegantly comfortable setting. The bartenders are ready to assist with smiles and information, and somehow intuitively decipher your imbibing needs. Upon getting our drinks (my husband chose an Argentinean Malbec) we were seated in a booth of golden, silk fabric, providing ample privacy, as well as views of the rest of the spacious restaurant, including the bistro-like outside patio with torches.

We were served crusty bread with a ramekin of smoothed butter glasses of cool ice water as our server, Matthew, enthusiastically described the menu. We felt perched on the edge of an exciting meal, and an exhilarating experience.

The Starter menu was the most difficult part of the evening. Each Starter item sounded just as appealing as the next: it didn’t seem possible to make a wrong choice. For no reason other than aesthetics, we selected the Asparagus Salad with truffle vinaigrette, watercress, a farm fresh egg and pancetta, anticipating the colors of the dish to pop off the plate. The egg, sitting delicately atop the al dente asparagus, spilled delicately over the plate, blending with the green of the watercress, and activating the unmistakable scent of white truffle. The egg paired with the pancetta hinted of breakfast and lent a fulfilling edge to the vegetable salad. The natural green of the asparagus spears blended with the yellow egg yolk to evoke fantasies of a mid-day meal in a seaside cafe on the Mediterranean.

We also ordered Steamed Mussels with fennel, leek and orange salsa verde from the Starter menu. The Steamed Mussels, crowned by thinly sliced fennel and leeks, proved assertive in a delicate, light brown broth, the crisp combination of which bounced off the smooth mussel flesh like an earthy liqueur. Chef Amy’s orange salsa verde is an herbal, citrusy garnish that completes the bite of this layered-with-flavor dish and keeps it refreshingly simple. We soon found ourselves staring at empty mussel shells, grateful that Matthew had - intuitively, of course - provided us with all the bread we required.

The Duck Confit, with cranberry beans, rainbow chard and applewood smoked bacon lardons was exquisitely francais. The tender duck, which pulled away from the bone with ease, was infused with a smokiness, saltiness and depth of flavor from the applewood smoked bacon lardons, its heartiness making us wonder if Chef Amy had a medieval hearth hidden amidst the stainless steel of her modern kitchen. My favorite part of this dish - to take nothing away from the duck - was the cranberry beans. Imported from France when not found locally, the cranberry beans were firm but velvety, simultaneously exotic and pastoral. The rainbow chard added a pleasant crunch and diverse texture and in the white bowl that cradled this dish, shone like rubies in a diamond mine.

Unable to speak while eating, Matthew asked us how our food tasted anyway, and checked on us just enough for us to know he was there, should we need anything. I mentioned smiles abounded, but certain touches, like seeing the owner replacing roses in Victorian vases and our server stating “The kitchen, it laughs,” filled Roseville with metaphorical touches that told me this restaurant has more than enough personality and resonance to be one of San Diego’s top gourmet dining spots for a long time to come.

That charm infuses each course with the Braised Berkshire Pork Cheeks with 3-pea ragout, earl onion, morel mushroom, kumquat and orange lavender honey glaze being no exception. It was my first time trying pork cheeks: tender, savory, lean and bursting with flavor, I can’t understand why I don’t see them on more menus. The pairings in this dish resembled a still life, especially the elemental morels. While this course tasted of autumn, it would be soul-comforting any time of year. The kumquat and orange honey glaze provided a hint of sweetness, an excellent finish to this rustic and inventive entree.

Eating the morels, I remember what Chef Amy told me about the biggest influence on her cooking: “What’s in season and what’s not.”  There could not be a better rule to cook by, except perhaps to put love and passion into everything created in your kitchen. Both philosophies are clearly heeded at Roseville.

Passion is unmistakably the underlying theme and common denominator of every offering at Roseville. The Orecchiette and Humboldt Fog Gratin is just such a dish, and is a popular choice for children. I have had pasta with cheese sauces and gratin in countless restaurants, yet, upon tasting this incarnation I found myself asking again “Why don’t more chefs/restaurants...” like Chef Amy? The mild goat’s milk cheese that is Humboldt Fog silkens and uplifts Chef Amy’s Orecchiette and Humboldt Fog Gratin above typical creamy pastas, beautifully integrating this artisan California farm-fresh ingredient into classic French cuisine. There was a slightly buttery, little crunch on top mingled with the subtle creaminess surrounding the lamb’s ear-shaped pasta for a dish that was rich but not overwhelmingly so, one that proved to be as wonderful on the palate as it was an idea for Chef Amy’s unparalleled repertoire.

I was wistful as the time for the last course approached. Although we had only been dining for approximately ninety minutes, it felt as though time had stretched pleasantly on in Roseville’s laughter filled, warm atmosphere. By this time, nary a table was left unfilled: wine glasses came together in toasts as families of four generations enjoyed Bolognese or Pan Roasted Salmon next to couples wrapped up in the romance of all Chef Amy’s French-Mediterranean cuisine has to offer, found in everything from the Imported Cheeses to the Chiffon Parfaits.

The Bittersweet Chocolate Pot de Crème with cognac Chantilly that I selected was ideal for sharing, although it could easily satisfy one very indulgent person. It was velvety, tasting more like cocoa than pure sugar, but not without an essential sweet finish. The cognac Chantilly, a pillow of cream, rests atop the dessert, unobtrusive to the integrity of the chocolate.

Roseville has all the sophistication of a gourmet restaurant celebrating seasonal, close-to-nature offerings, but is grounded in delivering a culinary experience rich in tradition as well as ability. Chef Amy DiBiase and proprietor George Riffle foresee the gastronomic future but reach smartly into the regional past, placing Roseville’s guests at a divine juncture. Everything about Roseville, its wine list, its intuitive staff, its cuisine, even its location, is irrefutably on point. 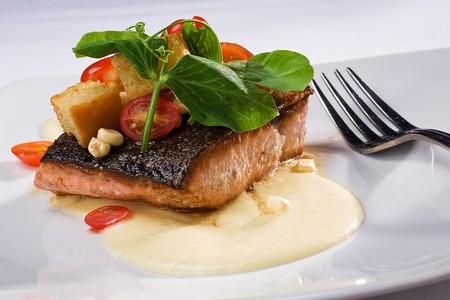 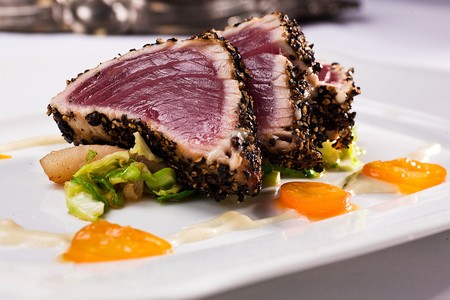 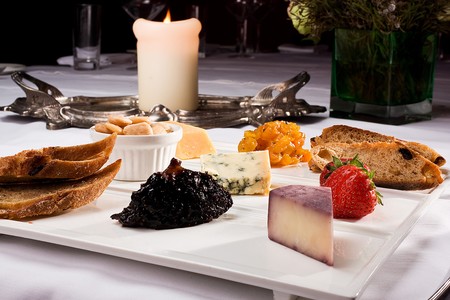 A selection of domestic and imported cheese, fruit, and bread 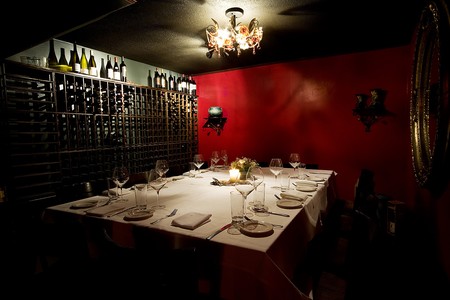 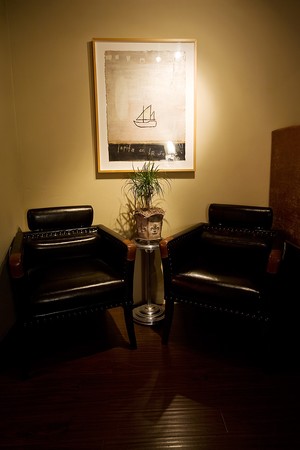 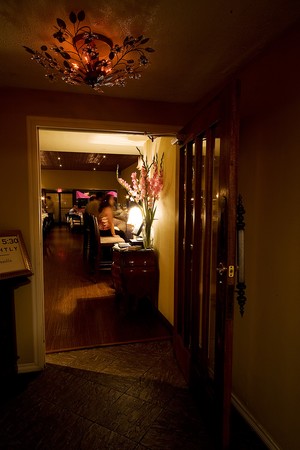 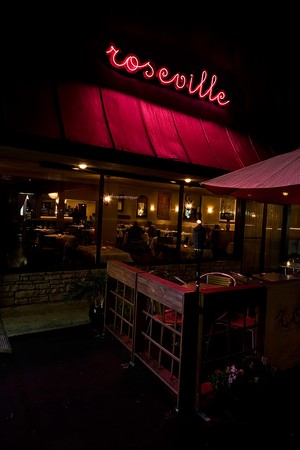 An exterior view of Roseville located in Pt Loma 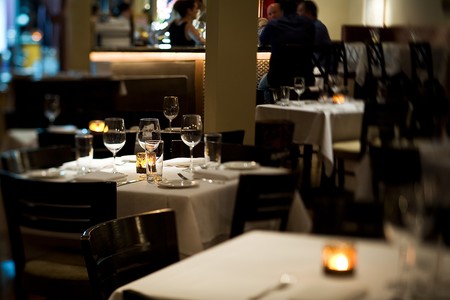 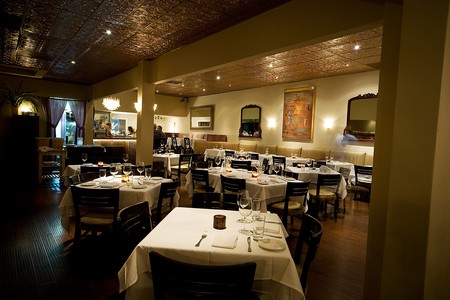 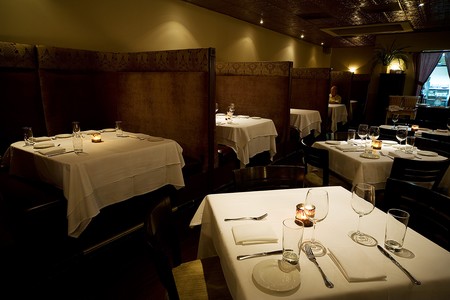