Mario Medina Executive Chef Spending many childhood days in the kitchen with his mother in Mexico City, Mario Medina developed a deep passion for food that inspired his journey of becoming an executive chef. After finishing culinary school in his hometown, Mario came to the United States to follow his dream. Working and learning in some of the finer kitchens on the west coast, Mario quickly established a reputation for great food and hospitality, driven by his desire to please every guest. His dream was soon realized when, in less than a year as Sous Chef at Chateau La Jolla Inn, he was offered the position of Executive Chef. Mario next took the helm at Paradise Grill in Del Mar, then Finch’s bistro wine bar for five years, Bernini’s bistro now he is leading the kitchen at The MainCourse restaurant in Ramona. Although still young and early in his career, Mario is becoming noteworthy for his culinary achievements, having been featured in magazines "San Diego Home and Garden", "Dining Out", "About Town", "Where", "Riviera", "Fine", "Ranch & Coast" and "Mexico Aquí", and on many local television news channels. Mario has been a participating chef for numerous fund-raisers and events like Cooking for Cancer, Make-A-Wish Foundation, Mama’s Kitchen, Taste of the Cove, the La Jolla Art and Wine Festival, and the Latin Food Festival, San Diego Food and Bank Chefs Gala, to name but a few. He is featured in a cookbook showcasing San Diego’s top chefs - San Diego Chef’s Table: Extraordinary Recipes from America’s Finest City - and is a weekly recipe contributor to 860AM Radio and Mexico Aqui Magazine. Mario’s ongoing commitment to excellence and true hospitality, paired with his passion and love of food, always ensure his guests leave happy. 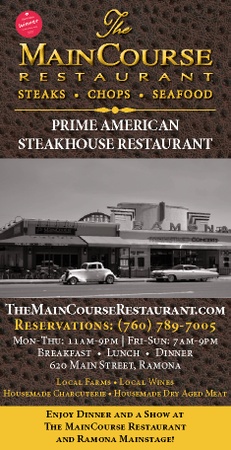 The front of the MainCourse 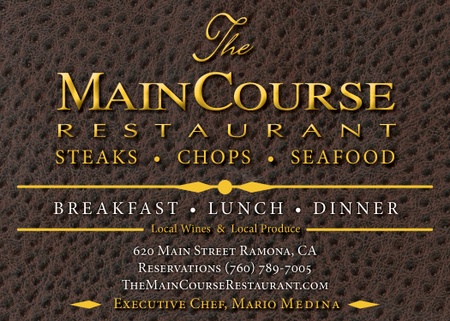