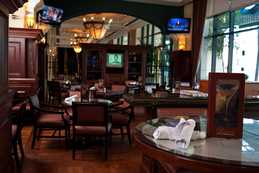 Redfield’s has delicious bar food, the quality of which is superior to many other sports bars in San Diego.  The task of making ordinary dishes taste extraordinary is absolutely not an easy task, but it is a task that Chef Robert Gunn has worked at for most of his life. Chef Gunn undertook this mission and has gone above and beyond to make Redfield’s Sports Bar synonymous with good food. I was lucky enough to speak to Chef Gunn on a recent visit to Redfield’s and he was kind enough to talk with me about what brought him to Redfield’s and how he learned to make his dishes this delicious.

A San Diego native, Chef Gunn truly worked his way up to the top, starting as a garde-manger at a free-standing restaurant in Point Loma just to get a foot in the door. A garde-manger is responsible for cold foods like salads, dressings, buffet items, and cold hors d’oeuvres. By 1998, Chef Gunn had made enough of a reputation to gain the position of Buffet Chef at the Grand Manchester Hyatt.  He eventually worked his way up the ranks at the Hyatt to become the Banquet Chef. Along the way he learned the secrets and responsibilities of practically every aspect of the kitchen, becoming a jack-of-all-trades.  He left the Hyatt for a few years to gain some experience in dining Mecca of Las Vegas, but eventually he returned to the Hyatt.  Chef Gunn was soon given the title of head chef at Redfield’s, as well as dabbling at another Grand Manchester restaurant, Lael’s Steakhouse.

Chef Gunn says that his specialty Is Southwestern and California cuisine; his cooking is no doubt influenced by California’s unique influence over Southwestern cuisine in this geographic region, and California’s abundance of natural resources.  He has a passion for “casual ingredients done right,” and utilizing the freshest local ingredients.  He mentions that one of the benefits of working for the Hyatt is the almost unlimited local resources at his fingertips.  Whereas a lot of chefs at free-standing restaurants are restricted to the ingredients that they are able to afford, suppliers are competing to do business with a high caliber hotel like the Manchester Grand.  Chef Gunn expresses appreciation for being able to use the finest local ingredients because it makes all the difference in terms of taste.

Chef Gunn also spoke of  the benefits of working at a gourmet sports bar like Redfield’s. He enjoys working in a casual atmosphere where customers are having a beer and watching a game, allowing him to take the time to garnish each dish with the attention it deserves. He also spoke very highly of the service staff at the restaurant, praising their friendly attitude and attention to customer service.  All of this is a part of the restaurant’s overall philosophy of “quality with casuality”; another saying coined by Chef Gunn that most aptly describes the atmosphere and cuisine at Redfield’s. II asked Chef Gunn if there was any other perks that come with working at a sports bar; in a very friendly manner with a warm grin he said, “I also get to watch a lot of sports.”